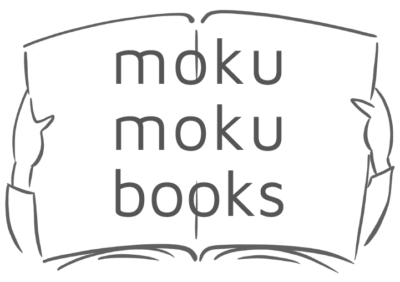 It conveys how clouds float in the sky, trees stand and grow steadily, and craftsmen concentrate on precision work.

mokumoku was chosen because it expresses the possibility of transformation to any forms.

Each one of us has a story to tell

In this era where connecting realtime is possible, mokumoku studio wants to  see what can be overlooked in that rapid speed. It is relaunched in order to be a platform to collaborate and continue making art

mokumoku believes in art which both children and adults can enjoy

mokumoku studio is interested in something that cannot be defined itself

MOKUMOKU STUDIO was initiated mainly by Chikara, the painter, his brother and his friend in 2007.

Five picture books were created and sold in variety stores and their artwork and goods were exhibited in Hiroshima, also they held workshops between 2007 and 2014.

In 2020, Tomoko Kakeda, an artist, joined and mokumoku studio was relaunched.

Not only do they make picture books but also they strive to hold workshops and develop content which can convey mokumoku’s unique worldview and narratives.

Started isolating himself from the society and became a shut-in, which gave him an opportunity to begin paintings and writing novels. Started making picture books as MOKU MOKU STUDIO in 2008.

Since 2011, as a member of Project NOW!, Chikara made installation pieces with the theme of Hiroshima and organized many exhibitions. He participated in an artist in residence in Nashville, Tennessee, where he exhibited and designed goods. In 2016, he had a chance to live and create art in a skidrow in Yokohama city for one year and a half. He now lives in Tokyo and strives to continue making art.